Submenu on the topic Education

You are here: Home > Education > myphotonics

Our new book series "1.000 Laser-Hacks für MAKER" features our achievements from three years of myphotonics in form of a few little books. This makes our experiments easier to reconstruct and to understand with the help of physical info boxes.

Starting in 2013, the project „myphotonics“ has focused on the construction of optomechanical components and the implementation of optical experiments using different modular systems such as Lego® and fischertechnik®. Its goal is to replace heavy and expensive mechanical components currently used in photonics through light and low cost elements.

Lists of component parts and instructions as well as assembly videos of developed components are available free of charge for reproduction. 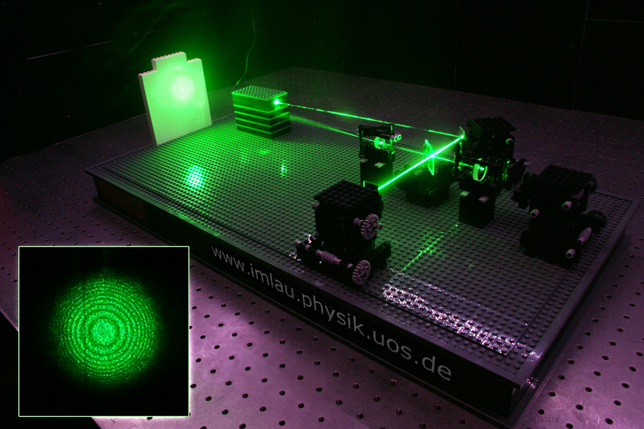 A Michelson interferometer provides the possibility to measure smallest differences in length, e.g. the thermal expansion of a piece of metal. In this context, the phenomenon called "interference" is used which can only be observed in the case of coherent light. In such an interferometer, the beam splitter as well as the partially transmitting mirror that overlaps both beams again are the same optic.

In order to achieve an accuracy less than 130 nm in an interference-experiment, stable and adjustable mirror mounts with a high precision are indispensable. Lego® provides a multitude of bricks enabling the construction of mirror mounts tailored for these requirements. 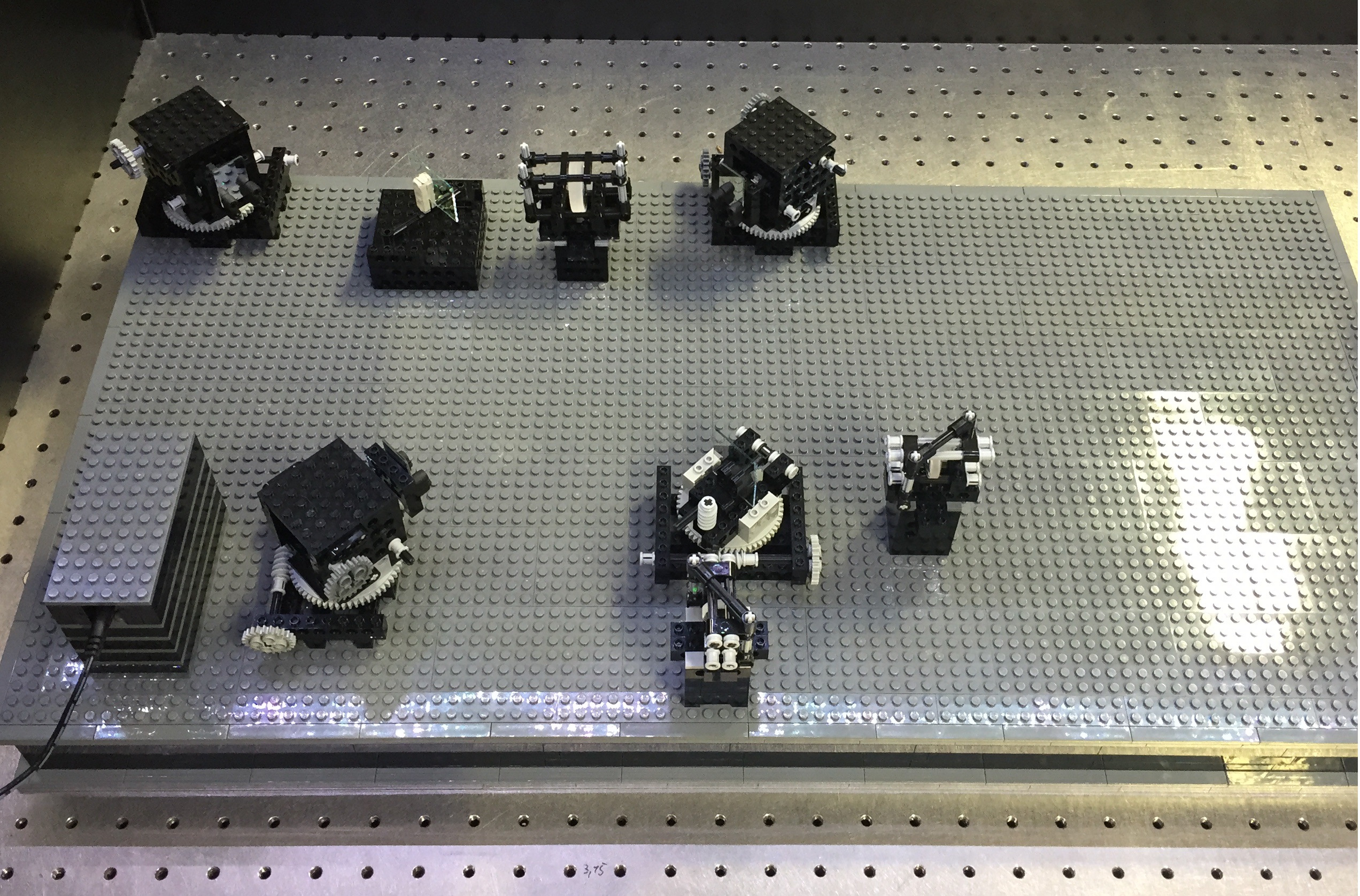 In a Mach-Zehnder interferometer one laser beam is split into two perpendicular beams traveling two different paths. Afterwards they are overlapped in a second beam splitter resulting in interference.

In a two-beam interferometer one beam is separated into two writing beams which will be overlapped at a later point. Unlike the Michelson or Mach-Zehnder interferometers, the angle between both beams will not equal 0° or 90°. A crystal is placed into the overlapping region enabling the recording of an elementary holographic grating. This grating can be compared to a usual thin grating that is also used in school. If the Bragg condition is satisfied, a third beam can show transmission as well as diffraction caused by the grating. This beam is called "reading beam" and can provide information about dynamic processes inside the sample. In the field of nonlinear optics lithium niobate (LiNbO3) crystals are frequently used.

The most important requirement for writing a holographic grating is a stable interference pattern within several 10 seconds up to minutes. Depending on the coherence length of the laser both beams have to be adjusted with an accuracy of a few microns. Lego® bricks provide an opportunity of a high stability as well as a precise adjustment. 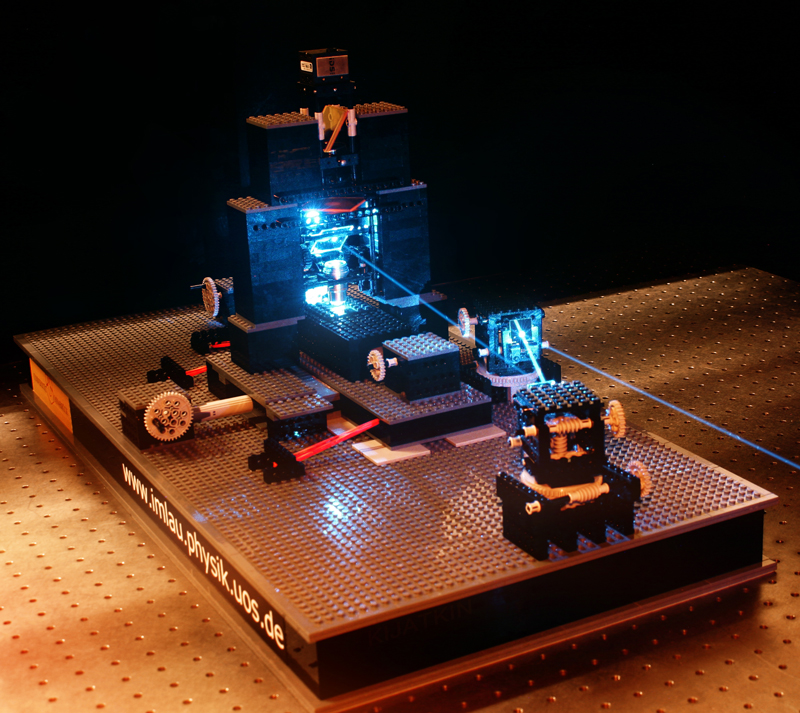 Optical tweezers allow for moving and manipulating particles sizing well below 1 µm that are not accessible by conventional tweezers. Particles are trapped by focusing a laser beam and can besubsequently moved through modulating the focal point position. This offers unimagined possibilities especially in biology, for example by inserting fluorescent markers into tissue enabling the examination of living organisms.

The key element of an optical tweezers is a microscope in which a laser beam is focused onto a sample. In combination with a camera the movement/manipulation of particles can be studied in real time simultaneously. This setup typically requires expensive components but a low-cost optical tweezer with comparable accuracy may also be constructed with Lego® bricks. 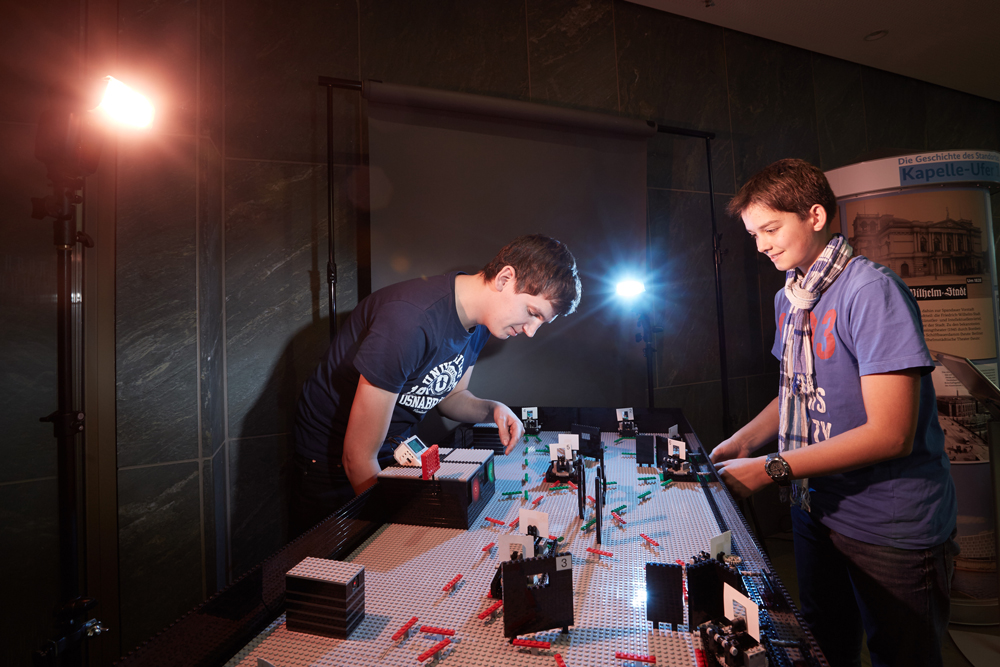 The laser labyrinth is prevalently addressed to young researchers and those making their first steps in photonics. The goal is to steer a laser beam through multiple obstacles by adjusting several mirror mounts. Two players can compete simultaneously and adjust a green or red laser beam with the faster player winning the game. Furthermore, the time is measured and the daily high score is displayed. The measurement is done by Lego® Mindstorms® components and software. 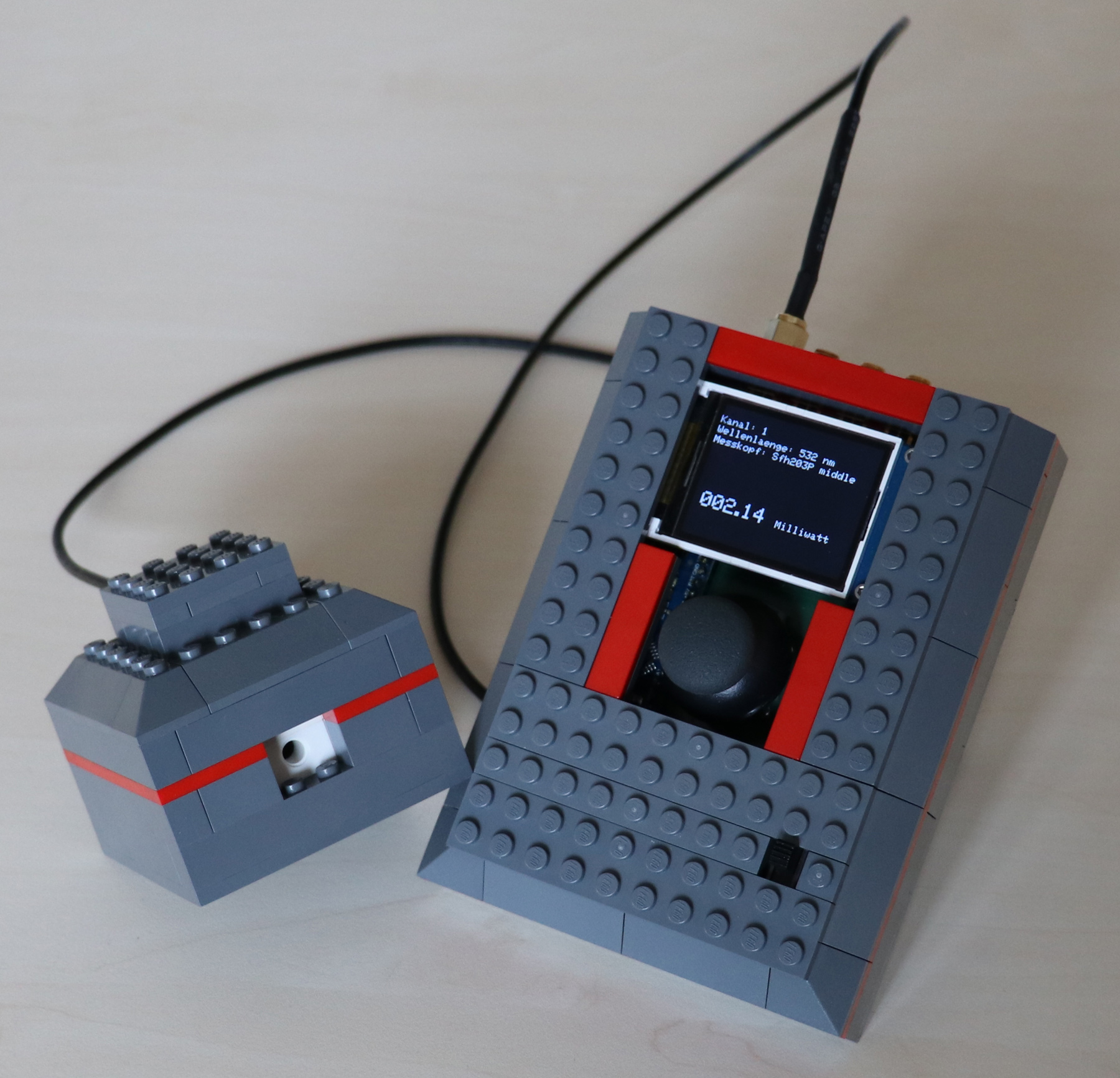 A laser power meter allows measuring the emitted light power of a laser. With the myphotonics power meter together with the corresponding detection head, electro-magnetic radiation in the range of 405 nm (blue-violet) to 785 nm (near Infrared) can be analyzed. For comparison, the human eye can detect wavelengths between 400 and 700 nm.

According to the directive of safety in school (Richtlinie zur Sicherheit im Unterricht) enacted at the German Conference of Ministers for Education on 26 February 2016, short-term irradiation of the eye (<0.25 s) may not cause any long-term consequences. In this context, a laser pointer which is utilized in combination with collector lenses has to belong to the laser safety class 2. Furthermore, its power may not exceed 1 mW. With this device, the laser's power can be determined and thus, its hazard potential can be estimated as well.

A spectrometer is a measuring device for determining light intensity as a function of light frequency or light wavelength. The myphotonics spectrometer can measure light in the wavelength range from 300 (ultraviolet) to 900 nm (near infrared) with a resolution of up to 0.1 nm. Thus, the recording of spectra in the wavelength range visible to the eye is possible. The range of applications includes not only the characterization of light sources and the color properties of everyday optical materials, but also the field of atomic spectroscopy and astrophysics.

Where can I buy the shown optic and photonic experiments?
myphotonics is an open-source-hardware project, i.e. component- and cost-lists as well as construction manuals that include references and recommendations for optics and LEGO® bricks are published free of charge on this website.

Do I need the breadboard constructed with LEGO® bricks for the experiments?
No, we recommend a low-cost alternative, e.g. a wooden or aluminum plate onto which one or two LEGO® baseplates are glued.

Is the used laser dangerous?
Especially for our developed experiments, we have selected a laser in the green spectral range (532 nm) with a power of 1 mW (laser safety class 2) which will not represent any danger for eye of skin (reference source on this website). Therefore, this laser may be used at home and in schools.

Can the experiments be used in school classes?
Yes, the experiments are designed for teaching physics in grades 10, 11, and 12. Construction, adjustment, and execution of the experiments can be carried out by students themselves during classes (average set-up and adjustment time: approx. 15 min). It is particularly exciting and cost-effective when required LEGO® bricks are selected from a personal or collective LEGO® bricks-stock.
In addition, a study showed a lasting increase of the learning effect.

How much does the construction of a Michelson Interferometer with LEGO®-bricks cost?
The optomechanical and optical components total a cost of 142 EUR with the LEGO® bricks taking the largest share of this. Students who already have the required LEGO® bricks available can realize the interferometer for about 42 EUR. In comparison, the corresponding components cost up to 20 times more (2870 EUR) in a professional version.